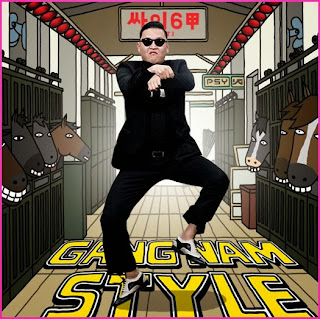 Name             Psy
Birthname    Park Jae-sang
Born on         31 December 1977
Park Jae-sang (born December 31, 1977), better known by his stage name Psy (Korean: 싸이, IPA: [s͈ai]; /ˈsaɪ/ SY), stylized PSY, is a South Korean singer, songwriter, rapper, dancer, record producer and television personality.
Psy is known domestically for his humorous videos and stage performances, and internationally for his hit single "Gangnam Style."
The song's refrain "Oppan Gangnam Style" (translated as "Big brother (to a female) is Gangnam style", with Psy referring to himself) was entered into The Yale Book of Quotations as one of the most famous quotes of 2012. 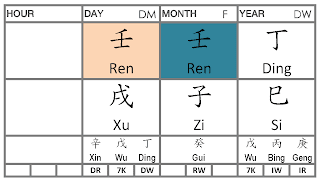 The Ren water in this chart is a Yue De Gui Ren.
The Ren is in Prosperous Qi Phase, very powerful.

This Ren Day Master is born in Zi month. Ren is the Yue De Gui Ren for people born in the month of Zi. There is a Ren in the Month HS which is a Yue De Gui ren with a very powerful “Prosperous” Qi Phase making the Gui Ren super effective.

This is very similar to Justin Bieber and both their songs, singing and dancing are as ridiculous. But they are both superstar and have one of the biggest fan’s following in the world.

In December 2012, MTV noted Psy's rise from little-known outside of South Korea to "global superstar", and, for being first in the YouTube-era to secure a place in pop-culture history, hailed the singer as the "Viral Star of 2012". On December 31, 2012, Psy performed in a globally televised New Year's Eve celebration with American rapper MC Hammer on-stage in front of a live audience of over a million people in Times Square, New York City.

The year it happens:
Huge phenomenon and world-wide hit called "Gangnam Style": one billion views on YouTube, one milliard clicks on internet at the end of 2012 (more than three millions copies of the single sold in the US). Gangnam is the District of Seoul whhere he lived.
The Ren Yue De Gui Ren arrives supported by Chen which combines with the Zi to form Ban He to Water.

The month it happens:
On December 21, 2012, his music video for "Gangnam Style" exceeded 1 billion views on YouTube, becoming the first and currently only video to do so in the website's history.
Again the arrival of another Ren Yue De Gui Ren supported by Zi. 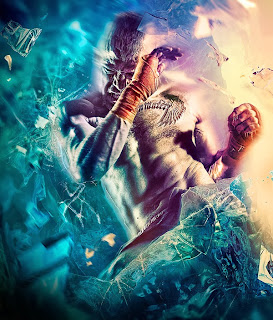 Posted by BaziFengshui at 11:20 PM